skip to main | skip to sidebar

After an extensive break from writing the blog 2011 is shaping up rather well. 2010 Summer shows were a great surprise. Normally the Summer season is one of safe bets, standard gallery collections or small works exhibitions so jam packed you could go blind. Not so for 2010, a glorious Summer indeed.

The year of the Rabbit is here at last brimming with promise as the global economic situation still reels. Getting back into the swing of things this will be more of a short note, not a full post. That will begin again next week.

Stay tuned more on these shows and openings next week.
Posted by Dianne Bowen at 4:57 PM No comments:

The past year was most certainly a bomb shell shaking the world to the quick on all fronts. Looking back, what were your favorite or most interesting shows of 2009? How do you see the future of art making in 2010?

What artists, emerging or established do you hope to see this coming season?

Let me know your opinions. 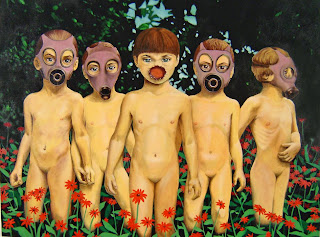 Split; One Night Only, Solo Exhibition

These “changelings” bare their innocence, pain, sexual pervasiveness and mutations openly to the viewer. Both Beautiful and disturbing, some recall mythical combinations of human – beast not made from divine sources but rather painful interventions. “Bisters”, drawing on paper depicts the boy- girl figure with small horns, a snout and blisters forming on the small chest. The body language also ambiguous seems alarmed at s/he’s discovery reacting as if caught off guard poised to run for safety or making a defensive stand towards the unknown pursuer. 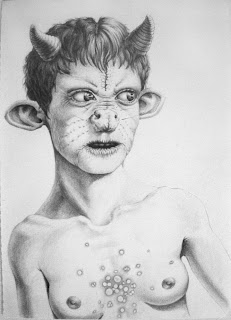 “Family” drawing on paper, depicts two larger pubescent figures with gas mask-like head gear holding the small child off it’s feet as they wrangle a tiger mask over it’s head. The suspended child hangs motionless with arms revealing more of a startled fear of an unknown result similar in feeling to stories of forced clitorectomies on young girls. Though the older figures clearly possess both gender physicality’s it is more the stance that suggests the more masculine of the two alluding to the offense of the mutation is from both genders. 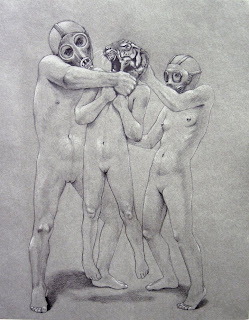 Catherine Tafur’s performance, a minimal set up consisting of a drawing easel with a drawing of a window with a tree outside. On a small pedestal; charcoal, lipstick, hand mirror, eraser, knife and clear large lidded jar. Tafur plays a soundtrack comprised of therapy sessions, phone messages, readings from the SCUM manifesto by Valerie Solanas and sounds sampled from online pornography layered onto a guitar piece. She draws, erases, re-draws, cuts, and strikes out, the figure and structure of the work continually redefining through process. Her acts are synced with the recording. One memorable act in particular was watching her applying lipstick to her mouth as she kisses the figure’s groin area that is left blank. She then kisses the torso as if healing the wound in an act of love.

The sound begins with Tafur saying, "Once upon a time, I lay naked, trembling and crying on a bed. I had nothing. I looked out the window and I saw a tree."

Tafur states, “the performance takes as it’s initial narrative, an autobiographical account of past sexual trauma. It then morphs into a hateful rage that becomes directed to the self. The piece is a metaphor about the creative process and the transformation of conflict in art. “

This was Catherine Tafur’s first performance piece. The audience gathered around sitting on the floor or standing. My knee cracked a bit getting up and well worth the effort. I’d gladly do it again to catch her next performance.

How it ends....? I’ll leave that surprise to see for your self.

You can find the performance in it’s entirety on You Tube or right here on the side bar.

For more information on Catherine Tafur’s work check her website;

Greene Contemporary: Welcome To My World 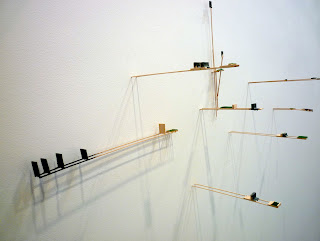 Worlds great and small invite the imagination to wander through diverse environments and situations. Billy Maker's work immediately drew my attention. Maker's multi-dimensional dioramas made from delicate sticks of wood inserted directly into the wall with small platforms and miniature spots of grass at times no larger than your pinky nail kept my focus. Fragile connecting structures intersecting with the shadows cast were reminiscent of high dive platforms and ancient indigenous cave cities were transformed into a contemporary or future scape. Curiously, one large shadow cast underneath loosely formed a folding gate. Intentional or not, it presented another direction to explore. Though the process of construction is delicate, the structures issue an underlying presence of strength.

Posted by Dianne Bowen at 4:29 PM No comments:

The Postcard show at Square One Gallery presented small works by artists and writers with readings by collaborators at the closing.

The concept peaked my interest, and rightly so. Unlike the usual small works or post card shows, it was not packed to the brim causing your eyes to flinch at the massive visual display. An array of themes and materials could be found including quite a few with a sense of humor.

The readings were a wonderful added bonus, in particular Bob Holman's reading "the box" piece. Jeff Wrights "plan b" which he let me read will be available soon. You'll have to wait to order through the site like me. Such is life, all good things are worth the wait.

To purchase works including box sets of mixed works or for further information and schedule.
www.PurgatoryPiePress.com
19 Hudson Street #403
NY NY 10013
212-274-8228
Posted by Dianne Bowen at 7:15 PM No comments:

Dianne Bowen
An informal place for open dialogue about art in all it's crazy, ego driven, self obsessive, fantastic, couldn't live without it forms. It is food for the soul. It all starts with one artist to another. Ready for a bit of a chat? You know what to do... leave a comment or submit an event email: dbowen64@mail.com

Founder/Editor - Dianne Bowen
Reviews/Commentary - Dianne Bowen,
Contributing Photographer: Nikki Johnson
That's A Good One - blog favorites
Out of The Box Featured Artists Gallery - curated on-line exhibition
Next Upcoming exhibition coming soon.
Speak to me in your language - Poets and writers
One The Street - street art
In A Snap - quick guide to events
life is short- make it worth it- events, listings
Artist Pages - direct link to artists work
Sites to wander through- links of interest, galleries, museums, non-profits, useful information for artists
What are You Watching ? Video Lounge
a selection of art videos and interviews

That's a good one, Blog Favorites

For undergraduate and graduate art students, myartspace has just launched a scholarship competition. To apply just follow this link; www.myartspace.com/scholarship

In A Snap - quick guide to events 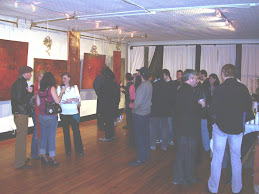 full details in the "life is short" section

the heart and soul of the East Village, upcoming exhibitions, performances and readings

The New Museum is brimming with upcoming events

Art in America June/July 07, article; Girls, Girls, Girls, by Carey Lovelace, pages 88-93, review with image pg 90, -- In A.I.R.'s 7th Biennal Exhibition---"Throughout the show, gender references, where they occurred, were oblique-innovative engagement with the female figure was gained through composition or materials rather than political or social critique. Dianne Bowen's horizontal wall piece Finnigan Begin Again ©(2006), one of the shows most effective works, featured brownish concentric swirls that brought to mind the rings of a tree or breasts or folding skin.Bits of guitar wire and seeds were applied to the surface and, in reference to life cycles and reproduction, small brown birds eggs were attached so that they seemed to float above the surface."

The exhibitionists project at "wish you were here" show, A.I.R. Gallery, NYC 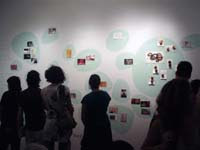 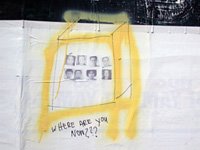 Photographic stickers from artist Valeria Cordero's project in the Asylum Exhibition at Whitebox Gallery, NYC, she handed them out to visitors to put up in different locations for her to find. This is a photograph of what I did with the stickers I was given. To see more of her work, check out her website in the "artists pages" below.